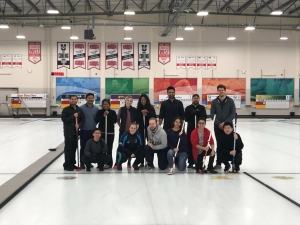 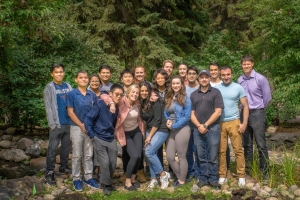 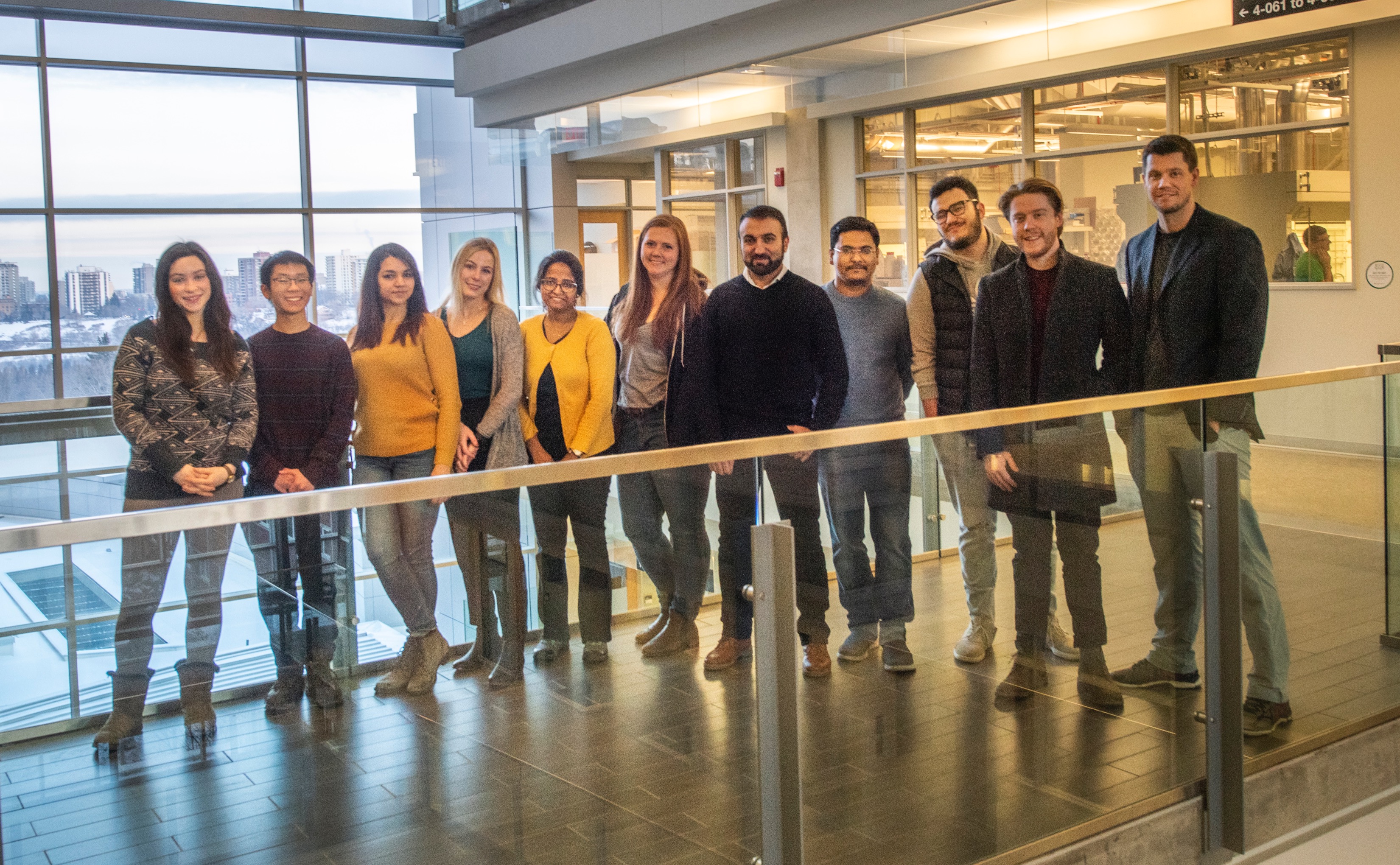 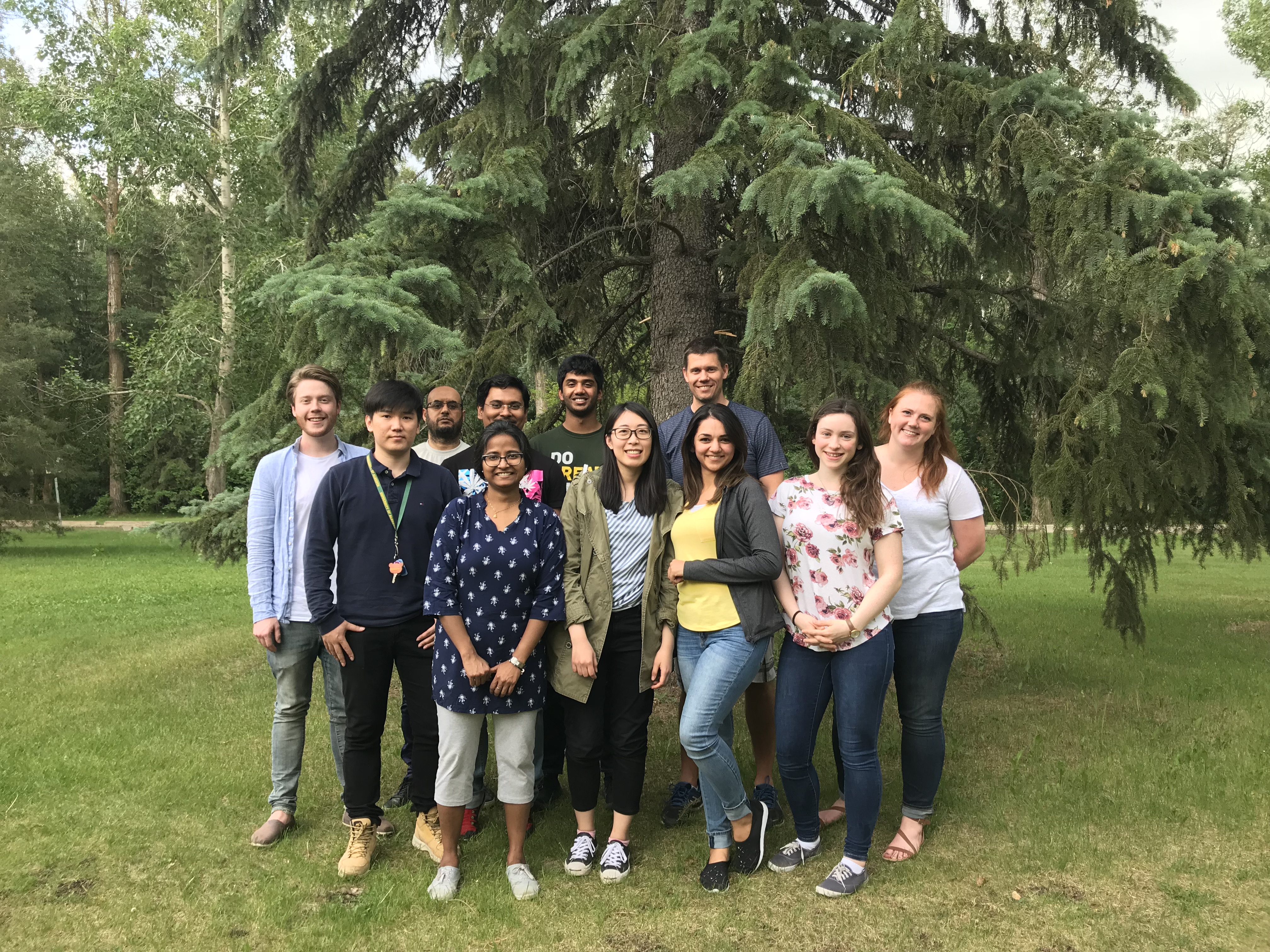 Check out the current members of the Macauley Lab. Click each member of the lab to read their bio. 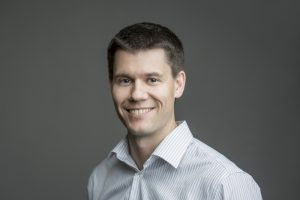 Trained as a biochemist, Dr. Macauley carried out his PhD with Professor David Vocadlo, at Simon Frasier University, using chemical biology to tackle roles for glycosylation. This interest was further developed during his Postdoctoral research with Professor James Paulson, at The Scripps Research Institute, where Dr. Macauley developed an expertise in glycoimmunology. For the three years prior to joining the University of Alberta, Dr. Macauley has been an Assistant Professor at The Scripps Research Institute where he has been developing projects that he is excited to carry on at University of Alberta. As a primary investigator in the Alberta Glycomics Center, Dr. Macauley joins an exceptional group of investigators with a specialty in the glycosciences. 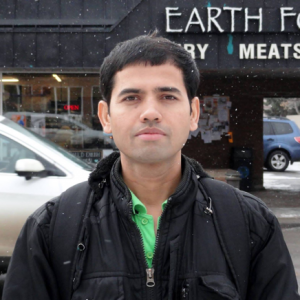 Gour, a carbohydrate chemist, received his Ph.D. in division of Organic Chemistry under the supervision of Professor N. Jayaraman at the Indian Institute of Science, Bengaluru, India. He was a postdoctoral researcher with Professor Olivier Renaudet at the University of Grenoble Alpes, France. At U of Greonble, he conducted research in carbohydrate chemistry and peptide chemistry towards construction of multi-epitopic synthetic vaccines against cancer. Thereafter, Gour joined the group of Professor Christopher W. Cairo at the University of Alberta as a postdoctoral fellow. His research involved in the areas of synthetic carbohydrate chemistry, bioconjugation chemistry, and glycobiology. He has over 16 publications to date. 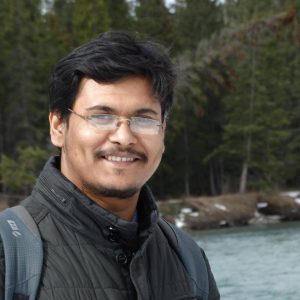 Abhishek completed his PhD from university of Calcutta, India in biophysics, molecular biology, and bioinformatics. During his doctoral studies, he worked on different aspects of protein glycation and nano-therapeutics in context to diabetic mellitus under guidance of Prof. Abhay sankar Chakraborti. His interdisciplinary research area focused on biochemeistry, biophysics, drug development, and animal studies. After completion of his doctoral work, he joined University of Alberta (Faculty of Agricultural, Life & Environmental Sciences), as post doctoral fellow with Dr. Mirko Betti. During his postdoctoral work, he worked on different aspects of glycobiology, biochemistry, microbiology and cellular bioavailability in correlation with functional product development. 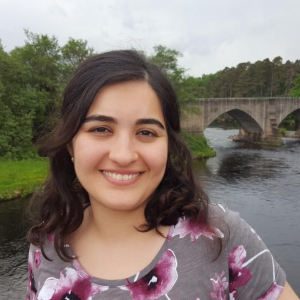 I did my undergraduate studies in Cell and Molecular Biology at University of Tehran and continued my studies as a M.Sc. student in Biochemistry at the same University. For my M.Sc. thesis I worked on the impact of cytoskeleton dynamics on memory formation in animal models (Wistar rats). I then moved to University of Alberta in 2013 and joined the group of Dr. David Westaway. During my Ph.D. studies I worked with several animal models of neurodegenerative diseases including tauopathy and prion disease mouse models. I defended my Ph.D. thesis in 2020 and have joined Dr. Macauley’s group to learn about the microglia and their role in Alzheimer’s disease. My biggest passion is studying the molecular and biochemical mechanism of brain function, and more specifically how it gets affected in case of neurodegeneration. 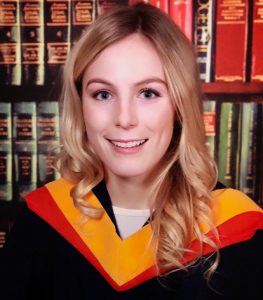 Kelli received her B.Sc. Honours in Biochemistry from Brock University in 2018 under the supervision of Dr. Paul Zelisko. Her thesis project focused on the optimization of various lipases for the synthesis of silicon containing phospholipids. 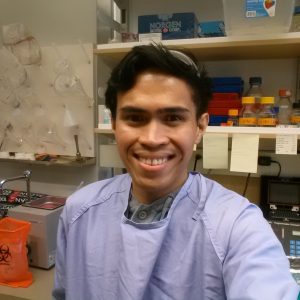 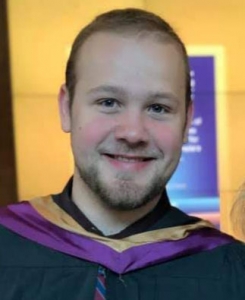 Eddie Schmidt completed his Honours Bachelor of Science in Biochemistry and Biotechnology from Wilfrid Laurier University in 2019.  His Honours thesis project which was supervised by Dr. Geoff Horsman involved the engineering of bacterial cytidylyltransferases and synthesis of various phosphonates. 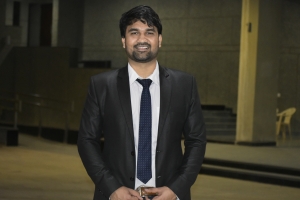 A native of India, Dhanraj Kumawat completed his B.Sc. in Chemistry from Hindu College University of Delhi and then graduated with Master’s Degree in Chemistry from Indian Institute of Technology Gandhinagar in 2019. His M.Sc. thesis project was supervised by Dr. Chandrakumar Appayee was entitled: “Synthesis of Noval Hydrogen Bond Donor Organocatalysts and Biologically Active Fargesin and Methyl Piperitol”. 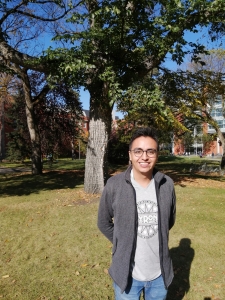 Santiago completed two B.Sc. degrees, one in Microbiology and one in Chemistry, at Universidad de los Andes in Colombia. In his undergrad he was able to be part of several research projects and groups, including the IGEM Colombian Team at the 2014 and 2015 completion, as well as doing two internships at Cornell University in 2017 and 2018. His thesis Project for his degree in Chemistry was related with click reactions, using light and Eosin Y as new catalyst for the coupling between terminal alkenes and thiols. He is now starting his Master’s degree at the University of Alberta and looking forward to working at the interface of chemistry and biology within the Macauley and Gibbs groups. In addition to being passionate about science, Santiago likes Star Wars and Lord of the Rings. 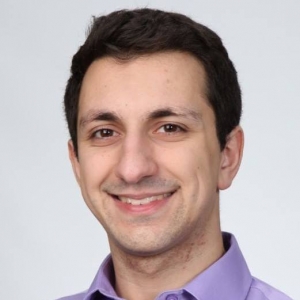 Jeremy Jerasi completed his B.Sc in Biological Sciences minoring in Chemistry from the University of Alberta in 2019. In his final year, he was a research member of the Wine Lab under the Faculty of Medicine and Dentistry at the UofA. His research project investigated the role of dietary fiber in its interaction with the host microbiome in Inflammatory Bowel Diseases (IBD). 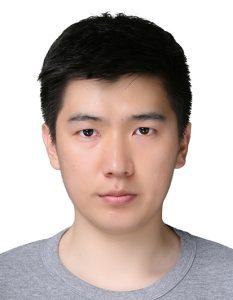 Jaesoo Jung finished his bachelor’s degree in Fine Chemistry from the Seoul National University of Science and Technology in 2015. He was a research member of Nano and Bio Cosmetic Laboratory and researched some natural materials which have antioxidative activity. He was in charge of extraction of effective natural molecule by using a variety of solvents which have different polarity. In 2014, he worked as a research assistant at Amorepacific Research Center under the supervision of Dr. Choi. Jaesoo was a member of cosmeceutical team and participated in a cutting-edge project. Specifically, his research was to find a composition of cream to stabilize pharmaceutical molecule through studying polymers, waxes, surfactants. 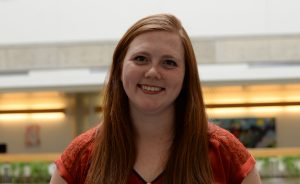 Emily Rodrigues received her B.Sc. Honours Specialization in Chemistry with a Major in Medicinal Cell Biology from Western University in 2015. Emily then completed her M.Sc. in Organic Chemistry in 2017 under the supervision of Dr. Len Luyt at Western University. Her project was focused on creating stapled peptides in order to stabilize the hyaluronan binding domains within the Receptor for Hyaluronan Mediated Motility (RHAMM) to interfere with the native interaction of hyaluronan and RHAMM in order to inhibit migration, inflammation, and fibrosis. 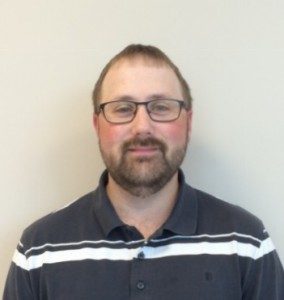 Chris completed his B.Sc. in Molecular Genetics in 2002 at the University of Alberta. He worked as a Lab Technician/Lab Manager for Dr. Dean Befus in the Department of Medicine at the U of A, from 2002-2015 studying Mast Cells and inflammation. He then worked for Dr. Ian MacDonald, Department of Ophthalmology, U of A, from 2015-2019 running the Viral Vector Core, where he developed and produced AAV and Lentiviral vectors for use in Gene Therapy pre-clinical trials. Chris joined the Macauley group in April 2019. 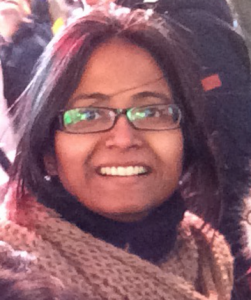 Susmita Sarkar finished her B.Tech in Pharmaceuticals and fine chemicals from Rajabazar Science College, Kolkata, India in 2001. She worked for a pharma company in India till 2007. In 2008, she joined University of Alberta to do her masters in pharmacy and pharmaceutical sciences under the supervision of   Prof M. R. Suresh. There, she worked on designing antibody-based point of care diagnostics for tuberculosis. In 2011 she joined Prof. D. R Bundle in chemistry as research technician and worked in the field of synthetic vaccines. In 2016, she joined Prof. R. Derda’s group in chemistry and worked in the project for designing genetically encoded array technologies. In 2017, she joined Prof. M. Macauley group as research technician. 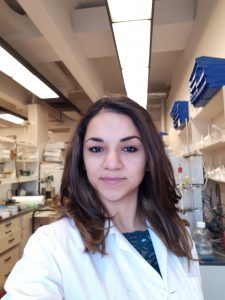 Fahima is currently in her forth year of studies at the University of Alberta, finishing up a Bachelor of Science with a double major in Biological Science and Chemistry. Fahima is excited to obtain research experience, especially in the area of synthesis, while more generally broadening her knowledge in science. 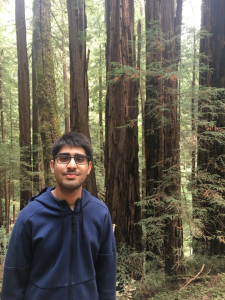 Arjun is currently going into his third year at the University of Alberta. He is pursuing a B.Sc. with a Biological Sciences major. His passion for biochemistry, immunology, and research led him to apply at the Macauley Lab. He is excited to join the Macauley Lab to obtain hands on research experience and further advance his knowledge in the areas of cell culturing. 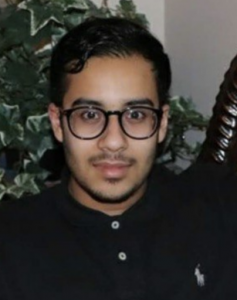 I am finishing up my 3rd year at the University of Alberta. I am pursuing a B.Sc in Biological Sciences with a minor in Psychology. I enjoyed Chem 261 with Dr. Macauley so when I found out his field of research aligned with my interests, I wasted no time in pursuing the opportunity. I hope to gain more knowledge and contribute in the field of glycoimmunology and further my research skills by learning more about the cutting edge technology used in the Macauley Lab. Aside from academic interests, I love sports and would be down for a game of basketball anytime. 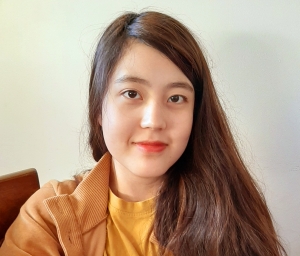 Summer is developing her understanding of Infection and Immunology, working through the second year of her bachelor’s degree at the University of Alberta. She is happy to apply her studies in the Macauley lab, in which she is helping with the molecular biology. Her passion for lab work was fueled by taking part in the WISEST program which she worked in Dr. Tykwinski’s lab for six weeks, purifying pentacenes for further research. She loves animals, especially her two pet cats, and likes playing the piano in her spare time.